Behind the Creating Value in Currency

Online payments and other transactions do not obliterate the value of our currency.

In fact, designing a nation’s currency is national branding of the highest order.

Given the privilege by the Bangko Sentral ng Pilipinas of designing banknotes and coins in 1985 and 2010, Design Systemat sought to capture the excitement of this enormous task and transform it into creativity befitting a people and its country.

Designing a country’s currency is communicating in the context of its history, culture, natural resources, social development of its people and their aspirations through time.  Ito ang hindi kaya ng digital gawin.

globally, it uses the latest of security technology to assure ‘transactors’ of its integrity.  In a sense, currency delivers a value proposition to its primary market.

As applied on our first coin design project – the 40th Bataan Corregidor commemoration with a dual portrait of an American soldier with then 3rd Lt. Ferdinand E. Marcos,we formulated a grid pattern for designing coins. We aligned the elements towards the center – a process that mathematically and symmetrically organizes the layout better.  In a way, it makes the coin’s narrative easily understandable because of the uncomplicated and logical presentation of the items featured.

The rest of the coins featured flora and fauna:

For both 1985 and 2010 series, a program of colors, typo treatment and layouting was drawn up to project a consistent graphic design look for both but with some underlying variations like the blank watermark space is now on the right side for 2010 rather than on the left for 1985.

2010 banknotes feature tourist spots for a change like the Tubbataha Reef Natural Park and its diversity of marine life rather than on government landmarks and events.  The role of currency in marketing the Philippines is clear in this regard.  Our experience in servicing the hospitality industry led us to suggest using the whole back panels for promoting the Philippines.  This will also spur the involvement of social media.

Another innovation being considered by the BSP for the 2010 bills was featuring Philippine heroes from different fields and industries: 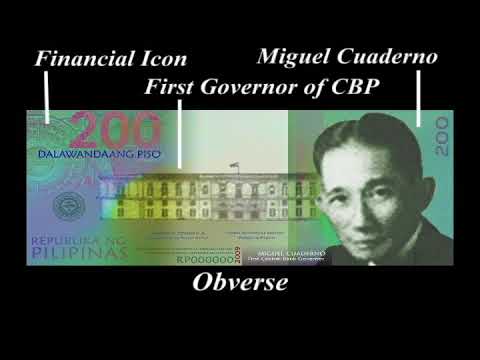 Ideas for a set of new coins were likewise focusing on heroes – such as OFWs and healthcare frontliners and educators. Gaining traction among these key sectoral and segmented stakeholders is a valuable by-product of the coins’ reachout.

Ultimately, the Philippine National Anthem shows the way to national branding by underscoring  our “Bayang Magiliw…Alab ng Puso…sa dibdib mo’y buhay.”  Banknotes and coins present slices of Filipino lives, heroic as well as patriotic – past and of the future.  As the English version of the national anthem says – “Land dear and holy…Cradle of noble heroes”.